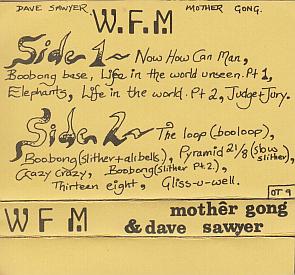 Gliss-U-Well, listed on cover, doesn't appear on my copy and is included on the reissue, though unlisted.

The line-up on this tape is Mother Gong 1981, credits below as they appear on early 90's cassette reissue:

Recorded Winter 1981/82 (source: PlanetGong website and Robot Woman 2 notes):
Robot Woman 2 credits on poster give no precise date for the sessions but notes suggest the album was recorded from Winter 1981 to beginning of Summer 1982 (with Malherbe's overdubs done around the time of Glastonbury 1982 Festival).

W.F.M. appeared for sale in 1982 from Ottersongs - GAS on Whats Going On Gas 82 magazine.
My copy has yellow inlay card (scan from my copy above), white Ottersongs labels, no release date.