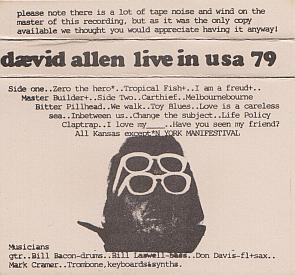 Please note there is a lot of tape noise and wind on the master of this recording, but as it was the only copy available we thought you would appreciate having it anyway!

All Kansas except *N YORK MANIFESTIVAL

- Zero The Hero: "People Poem"/"Ooby Scooby Dooms Day" coda. 1978-10-08 Manifestival. On NY Ding Dong.
- Tropical Fish: impro middle part & coda only. No "Selene". Same version as on Gilli's Live In USA 79 GAS tape.
- Melbournebourne: poem on Book Of Chloroforms, recited at the end of "I Am A Bowl" (Banana Moon).
- Toy Blues: "Big Daddy" (Dreamin A Dream) "Tokyo Freedom Blues" (Hit Men) "I Don't Wanna Be" (Obscura8).
- Love Is A Careless Sea: other versions on Allen Trio Live 1963 and Obscura # 9 ("Sex Is A Careless Sea").
- Inbetween us: includes the unlisted poem "Jealousy". Same version on Gilli Smyth's Live In USA 79 GAS tape.
- Change The Subject..Life Policy: listed as separate tracks. This starts "When" on Dividedalienplaybax80.
- Claptrap: aka "Ode To Pelvic Inflammatory Desease".
- I Love My ____: part of this poem can be heard at the end of "Banana Reggae" on Alien In New York.

This release appeared for sale from Otter Songs (GAS) on G.A.S. - Gong Moving On - Autumn 1981 magazine.
My copy has ivory inlay card (my scan above), white Ottersongs labels and no release date or catalogue number.

It was reissued on cassette (G.A.S. GL6) but never released on LP or CD.

Thanks to Gilbert for donating his original cassette.