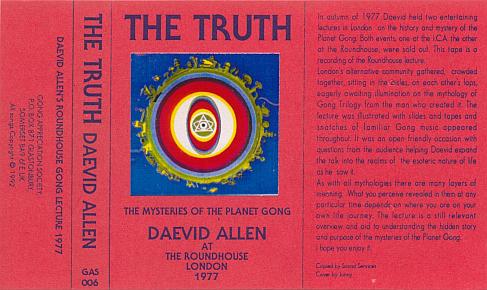 In autumn of 1977 Daevid held two entertaining lectures in London on the history and mystery of the Planet Gong. Both events, one at the I.C.A. the other at the Roundhouse, were sold out. This tape is a recording of the R ouyndhouse lecture.
London's alternative community gathered, crowded together, sitting in the aisles, on each other's laps, eagerly awaiting illumination on the mythology of Gong Trilogy from the man who created it. The lecture was illustrated with slides and tapes and snatches of familiar Gong music appeared throughout. It was an open friendly occasion with questions from the audience helping Daevid expand the talk into the realms of the esoteric nature of life as he saw it.
As with all mythologies there are many layers of meaning. What you  perceive revealed in them at any particular time depends on where you are in your own life journey. The lecture is a still relevant overview and aid to understanding the hidden story and purpose of the mysteries of the Planet Gong.
I hope you enjoy it.

Recorded on September 4th 1977 at the Roundhouse in London.
Precise date not indicated on cover, taken from the lecture's program (reproduced below).

The Truth was first released by GAS in 1979. It appeared for sale on Essential GAS list 1979.
Ottersongs reissued the cassette in 1982 (on Whats Going On Gas 82 magazine).

1992 reissue on GAS label with different cover (red inlay card, blue lettering and a colour square stuck on front).
See picture above (a scan of my copy). 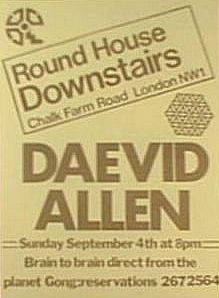