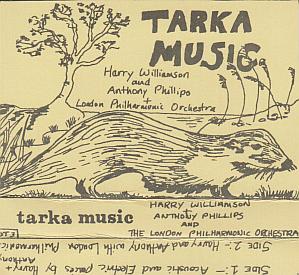 This cassette doesn't list movements and section titles: below is how they appear on the 1988 PRT version.

Movement IV - The Anthem is not present on this cassette edition.

Gilli Smyth & Lol Coxhill's track on Odd Acts Event GAS tape used the end of Movement II and the start of Movement III of "Tarka" as background (the first 12 minutes of side 2).

The cassette has no info about the recording dates; according to Anthony Phillips Songbook, Movement I (demo) was recorded in May 1975, Movement II (demo) in April 1976 and Movements I, II & III (orchestral version) in Summer 1977.

"Tarka Music" appeared for sale from Ottersongs - GAS on Gong Moving On 1981 magazine.
My copy has yellow inlay card, white Ottersongs labels (scan of my copy above) and shows no release date.

Described on Whats Going On Gas 82 mag as: "Side 1 acoustic + electric, side 2 with London Philharmonic Orchestra".

The music was re-recorded and finally released as Tarka on PRT Records in 1988.
That first lp and cd edition is now deleted.

Blueprint released a new edition of this album in 2003.
You can buy Tarka on line from Planet Gong official website and support the artists.

References to Tarka can be found here and here.