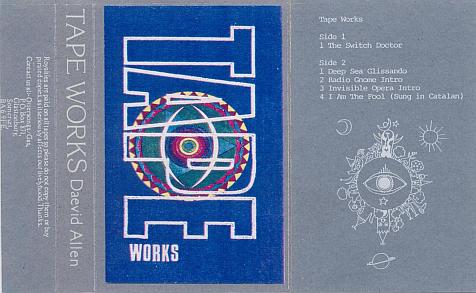 Royalties are paid on all tapes so please do not copy them or buy
pirated copies, as it seriously affects our livelyhood. Thanks.

- Starts with BBC speaker introduction which is not on the The Death Of Rock & Other Entrances cd.
- Piano bit later used in "Givin' My Luv To You" on Radio Gnome Invisible Part 2 - Angels Egg.
- "My Head Is A Nightclub": a version on Allen Trio Live '63; a verse used in "High Points" (Dreamin' A Dream).
- "What Do You Want?": loop with Gilli Smyth's voice, also used in "Collage Patafisico" on The Twelve Selves.
- "I have to go now": Hugh Hopper, in "Time Of  Your Life" (Banana Moon) and "Collage Patafisico" (12 Selves).
- "You Perfect Word": poem published on Book Of Chloroforms, recited by Daevid in Spring 1979 L.A. reading.
- "Cpt. Shaw & Mr. Gilbert": also on The Mystery And The History Of Planet G**G and often recited live.
- "From under his tinkered eye her body is a twinge of white magick": poem published on Book Of Chloroforms.
- "Don't remember": Bill Burroughs ("You Never Existed At All" Death Of Rock and "Collage Patafisico" 12 Selves).

Cassette inlay card is grey with white lettering and has a color artwork rectangle stuck on front cover.
See my scan above.

No release date on cover, it appeared for sale on G.A.S. price list 1990.
Reissued in 1992 as GAS 009 with different cover.
A planned cd in Bananamoon Obscura series (N. 19 - Tapeworks & earpoetry) supposedly includes this material.