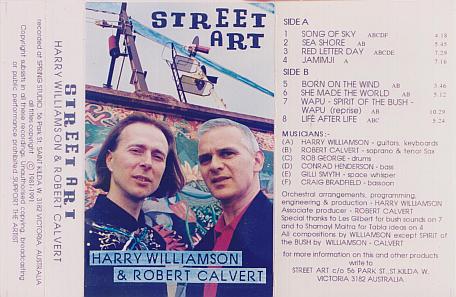 Orchestral arrangements, programming, engineering & production - HARRY WILLIAMSON
Associate producer - ROBERT CALVERT
Special thanks to Les Gilbert for bush sounds on 7 and to Shamayl Maitra for Tabla ideas on 4
All compositions by Williamson except Spirit Of The Bush by Williamson - Calvert

For more information on this and other products write to
STREET ART c/o 56 PARK ST., ST. KILDA W. VICTORIA 3182 AUSTRALIA

Actually this is not a GAS release but a self-produced cassette by Harry Williamson's own St. Kilda studio.

The cover for this release was printed on glossy photographic paper and the cassette is high quality tape.

The last few copies of this cassette can be ordered from PlanetGong website.