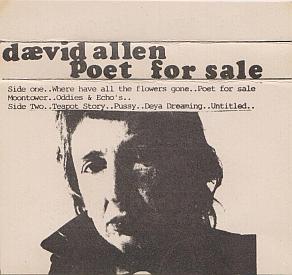 *Otter Songs*
Real time recording
© All rights of the manufacturer and of the owner of the recorded work reserved.
Unauthorised public performance, broadcasting and copying of this tape prohibited.

THE OCTAVE DOCTORS C/O CATAPILLA, 17 NORTH ST, EXETER, DEVON.
(This was a handwritten G.A.S. address - circa 1984 - added on inner inlay of my copy)

[NOTE: one of my copies of this tape, instead of the usual Ottersongs labels, has technical data from the company who mastered the cassettes (data in blue added by hand). The title is typewritten (scan of my copy below)]:

All rights of the recording company and of the owner of the recorded work reserved.
Unauthorised public performance, broadcasting and copying of this tape record prohibited.

A selection of studio out-takes and alternative versions of songs from the "Happies  Time Of Your Life" era.
Recorded at the Bananmoon Observatory, Deya, Mallorca by Daevid Allen on a Teac 4 track.1976-77.
Produced by Daevid Allen.

- Where Have All The Flowers Gone: Deya (SP) '76 demo. On Mystery & History Of Planet G**G, longer here.
- Poet For Sale 1: Deya 1977. The end was used in "Tali & Orlando" on Now Is The Happiest Time Of Your Life.
- Poet For Sale 2: Deya 1977. Apparently same as Now Is The Happiest Time Of Your Life version (but mono).
- Moontower: Deya 1977. With false start and different mix from Now Is The Happiest Time Of Your Life LP.
- Oddies & Echo's: "Frere Jacques" quoted. Unknown date.
- Teapot Story & Pussy: 1973 radio session, Daevid's BBC gnome story with excerpts from RGI1: Flying Teapot.
- Deya Dreaming: "Wee Bit More" on guitar, no vocal. No date. Another version on Studio Rehearsal Tapes 77.
- Untitled: Daevid on guitar. "Across The Wide Missouri" quoted. Gilli speaking and birds singing at end. No date.

Poet For Sale appeared for sale from Ottersongs - GAS on Gong Moving On 1981 magazine.
It has ivory inlay card (scan of my original copy above), no release date or catalogue number.

It was reissued on cassette in 1992 with same content, different cover and some info about the recordings.

"This must have been original stock that I inherited from Gilli and Harry. These were the first run as far as I can tell. Triple M were the company that did the reproductions. We then later released a whole new batch of new titles and with them came the 'ottersongs' label...".