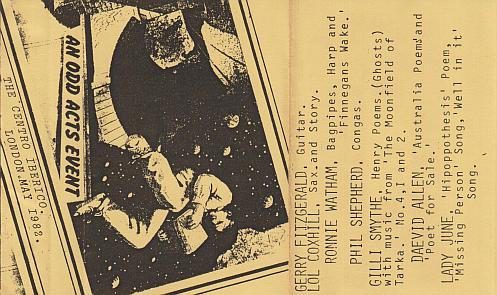 All rights of the manufacturer and of the owner of the recorded work reserved.
Unauthorised public performance, broadcasting and copying of this tape prohibited. © 1982

- Gerry Fitzgerald & Lol Coxhill: "Story" / improvisation.
- Ronnie Watham & Phil Shepherd: "Finnigan's Wake" / "Miss McCloud's" / "Will You Come Down To Limerick?" -
"The Whinney Hills Of Leitrim" / "Wet Cunt " / "Lord Mayo" / "Black Mare Of Fanad" (aka "9 Points of Roguery").
- Gilli Smyth & Harry Williamson with Lol Coxhill: Gilli recites poems over Tarka Music tape (Movement II).
Poetry includes bits of "This Train" (Robot Woman 2) & "The Sea" (Robot Woman).
Gilli cut her set short ("I was going to do lots of poems but I haven't got any voice so Lol is going to be me").
This is followed by an impro by Coxhill starting over Tarka then continuing alone until Tarka comes back at end.
- Daevid Allen: Poems ("Gone & Wondering Waltz", "In Child Summer" and others). No "Poet For Sale" on tape.
- Lady June: starts with a short song with the melody of italian "O' Sole Mio" later included on 1988 GAS Tape.
"Hipoppothesis" was later released on Hit & Myth and on Histories & Mysteries Of Planet Gong (expanded).
"Well In It" was later released on Hit & Myth.

A description of this show can be found on Calyx website.

This cassette appeared for sale from Ottersongs - GAS on Whats Going On Gas 82 magazine.
My copy has yellow inlay paper (scan of my copy above), white Ottersongs labels.

Except for "Hipoppothesis" (Histories & Mysteries Of Planet Gong on Voiceprint), this material remains unreleased on cd. 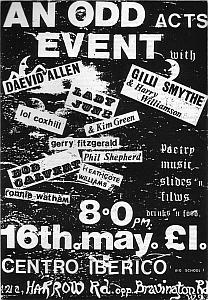