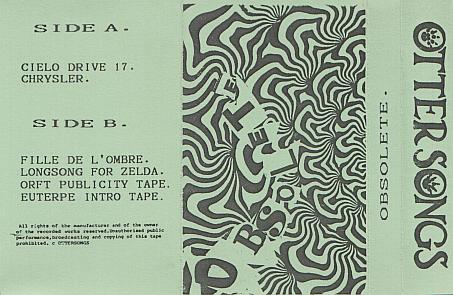 All rights of the manufacturer and of the owner of the recorded work reserved.
Unauthorised public performance,  broadcasting and copying of this tape prohibited. C OTTERSONGS

Commonly known as "Obsolete Outtakes", this cassette was issued to make a long deleted album available.
This is a tape recording of Obsolete from vinyl but the running order is not the same as original release.
Side 2 of LP ("Cielo Drive") is on A side of this tape. "Hey Mushroom, Will You Mush My Room?", originally one long piece which took all of side 1 of LP, is broken here, so "Chrysler" is on side A of tape while the rest is on side B with bonus items.

No musicians listed on cover.

No release date on cover or labels. It appeared for sale on the 1988 G.A.S. Merchandise Catalogue.
A later reissue (no release date - from early 90's) dropped the extra content presenting a nice replica of the LP on tape.