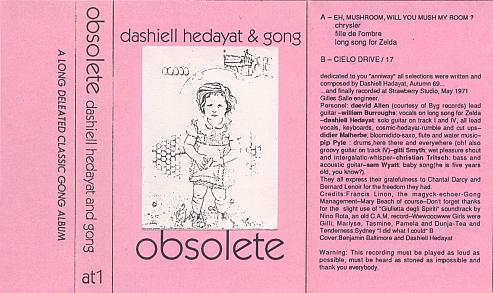 Dedicated to you "anniway" al selections were written and composed by Dashiell Hadayat, Autumn 69....
....and finally recorded at Strawberry Studio, May 1971
Gilles Salle engineer.

They all express their gratefulness to Chantal Darcy and Bernard Lenoir for the freedom they had.
Credits: Francis Linon, the magick-echoer - Gong Management - Mary Beach of course - Don't forget thanks for the slight use of "Giulietta Degli Spiriti" soundtrack by Nino Rota, an old C.A.M. record - Wwwooowww girls were Gilli, Marlyse, Tasmine, Pamela abd Dunja - Tea and tenderness: Sidney "I did what I could" B
Cover:Benjamin Baltimore and Dashiell Hedayat

Warning: This recording must be played as loud as possible, must be heard as stoned a impossible and thank you everybody.

This cassette was issued to make available a long deleted album. This is a tape recording of Obsolete from vinyl, identical (also graphic wise) to original release. As this record has been released on CD, this cassette is issential only to completists.

The cover has pink inlay card, black lettering and a b&w rectangle stuck on front with part of "Obsolete" artwork.

No release date appearing on cover (most probably released in the early 90's).
There was a previous cassette reissue on Ottersongs with some bonus tracks (not related to these sessions).