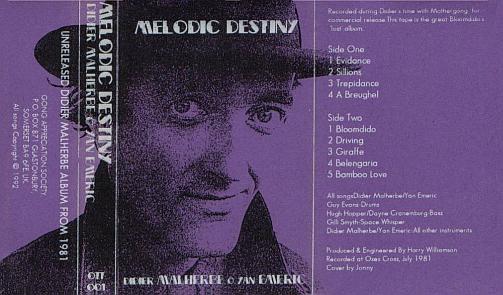 Recorded during Didier's time with Mothergong for comercial release.
This tape is the great Bloomdido's 'lost' album.

- Evidance: starts with two notes not on '81 issue. A live version on MotherGong Glastonbury Festival '79-81.
- Bloomdido: written by Charlie Parker.
- Driving: a live version, with lyrics (entitled "What's Going On"), is on Mother Gong's Glastonbury Fayre tape.
- Bamboo Love: instrumental version of "Please Give A Chance To To-Morrow" (no intro and coda), on Bloom lp.

The line-up on this tape is basically Mother Gong (1981 edition), featured at Glastonbury CND Festival that year.
Harry Williamson is on production and engineering.
Many years later, a part of "Driving"'s theme (performed by Mother Gong in Glastonbury 1981 as "What's Going On") was incorporated in "Can You: You Can", Malherbe's composition on Shapeshifter.
Melodic Destiny is truly one of Bloomdido's finest works ever!

This tape was first released in 1981 and appeared on sale from Ottersongs-GAS on Gong Moving On 1981 mag.

This 1992 reissue on cassette had a different cover and slightly different track order; the album was never released on lp or cd.
On cover "Belengaria" is listed after "Giraffe" but actually the order is inverted.

Surprisingly, the wonderful music on Melodic Destiny is not available elsewhere, so this tape is essential for completists.

Here is an excerpt from GAS - Gong Moving On - Autumn 1981 magazine (note the June 1981 recording date).
Whats Going On Gas 82: ".........with Yan Emeric he creates a basically European music with Medieval Undertones, acoustic sounds around which the electricity hovers".