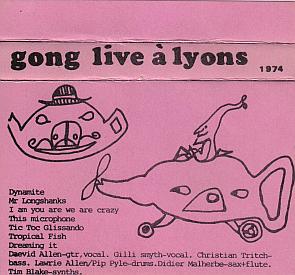 Credits on cassette:
(Note: below is the INCORRECT info as it appears on cover)

Tracklist on cover of first issue is incorrect:
(Note that all songs listed except "Mr. Longshanks" belong to Gong Live At Mallacoff):

Line-up on cover is incorrect as well:
(Both Allan and Pyle listed, this might suggest that either the lineup was unsure or the list might be for an aborted compilation):

All rights of the manufacturer and of the owner of the recorded work reserved.
Unauthorised public performance, broadcasting and copying of this tape prohibited.
© OTTERSONGS

- Intro: Radio Gnome loop collage used as concert intro.
- I Am You Are We Are Crazy: "The P.H.P.", from end of 2nd verse. On Mystery & History Of Planet G**G.
- Tic Toc Glissando: a different title for "Zero The Hero And The Witch's Spell".
- Pussy: aka "Witch's Song / I Am  Your Pussy".
- Why Are We Sleeping: the coda includes part of "Fohat Digs Holes In Space".
- Radio Gnome 1: aka "Radio Gnome Invisible".
- Maybe You Believe It: aka "Mouseproof". Includes part of "I Got A Donkey" and "I Feel So Lazy" spoken intro.
- I Feel So Lazy: a different version (Angers 1972) released on The Mystery & The History Of Planet G**G.
- Time Of Your Life: preceded by "Tried So Hard" coda.
- Tropical Fish: no "Selene" coda.
- Dreaming It: fades out, continuing to end on Gong Live A' Lyon Part 2 GAS tape.
- ?: a mystery. Jonny Greene on PlanetGong Forum: "The bit of 'electro-pop is on the original duplicating tape".

Tracks A1, 4, 5, 6, 7, B1 & 2 not listed on cover of first issue. Titles of unlisted songs as they appear on reissue.
Some sound changes (wider stereo image) and parasite background are noticeable here and there on some songs.
Track B5, an extraneous leftover on the tape, was removed on reissue.

This first issue was incorrectly titled "Gong Live A' Lyons 1974".
It might be that whoever dated the show for release trusted his memory or simply the tapes were accompanied by wrong info.
Reissue was correctly retitled Gong Live At Lyon 1972 Pt 1.

Line-up as corrected on cover of reissue:

(Francis Moze on bass and Steve Hillage on guitar are unlisted on cover. Christian Tritch on guitar, not bass).

In 2008 I enquired Tim Blake about the Lyon shows on the PlanetGong forum. Read the complete discussion here.

This tape appeared for sale from Ottersongs - GAS on Gong Moving On 1981 magazine.
My copy has pink inlay card (my scan above), white Ottersongs labels, no release date or catalogue number.

Reissued a couple of times on cassette but never on LP or CD.
"The Pot Head Pixies" was released on The Mystery & The History Of Planet G**G (LP & cd).