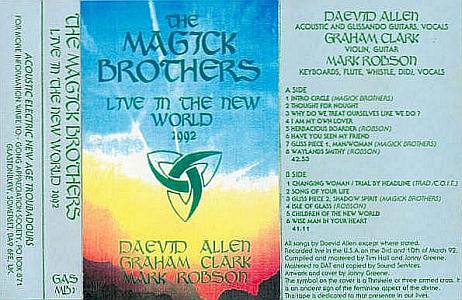 - I Am My Own Lover: "A slight distortion" of The Owl & The Tree song becoming "I Am My Own Roadie".
- Changing Woman / Trial By Headline: "Changing Woman" is "Titicaca" (no usual violin part).
- Song Of Your Life: aka "No Other Than The Mother Is My Song".
- Gliss Piece 2. Shadow Spirit: also included on The 1992 GAS Tape as "Shadow Spirit".
- Children Of The New World: "Graham Clark on violin & the guitar (...) bought today in this town Rochester".
- Wise Man In Your Heart: fades as "Magick Brother" is starting.

No release date on the cover but as The 1992 GAS Tape (released in 1992) has one song from this tape, that has to be the release date for this Magick Brother cassette as well.

The material on this tape was never released on lp or cd, so it is an essential addition for completists and fans of this great trio.

All songs by Daevid Allen except where stated.
Recorded live in the U.S.A. on the 3rd and 10th of March 92.
Compiled and mastered by Tim Hall and Jonny Greene.
Mastered to DAT & copied by Sound Services.
Artwork and cover by Jonny Greene.
The symbol on the cover is a Thrishele or three armed cross. It is an ancient sign of the feminine aspect of the divine.
This tape is dedicated to that presence in our lives.