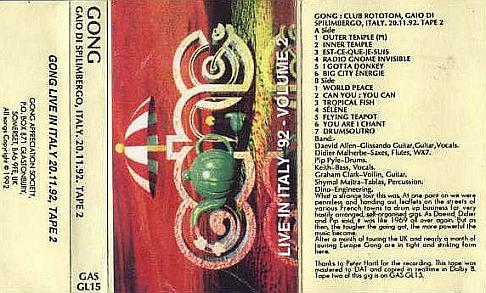 What a strange tour this was. At one point on we were penniless and handing out leaflets on the streets of various French towns to drum up business for very hastily arranged self-organized gigs. As Daevid, Didier and Pip said, it was like 1969 all over again. But as then, the tougher the going got, the more powerful the music became. After a month of touring the UK and nearly a month of touring Europe Gong are in tough and striking form here.

Thanks to Peter Hartl for the recording. Tape two of this gig is on GAS GL 15.
This tape was mastered to DAT & copied in realtime in Dolby B.

- Est-Ce-Que-Je-Suis: "Figaro" quote from the "Barbiere Of Seville".
- Big City Energie: aka "Side Windo" (New York Gong's version).
- World Peace: aka "Negotiate" or "Peace Train". Violin solo then "Blame The Rich" section. No "Negotiate" coda.
- Can You: You Can: part of theme uses a bit from Didier's "Driving" (Melodic Destiny) aka "What's Going On".
- Tropical Fish / Selene: listed separately.
- Flying Teapot: preceded by band introduction.
- You Are I Chant: "The Mantram Chant Of You" ("You Never Blow Your Trip Forever" You coda).

The notes from cassette cover (transcript below) state this tape is from the only Italian gig from the tour; either there was also another show in Udine (which is not far from Spilimbergo) or this was really the only italian show and the chronologies list an incorrect entry.

This tape (as its Volume 1 twin cassette) was never released on LP or cd, so it is still an essential addition for completists.