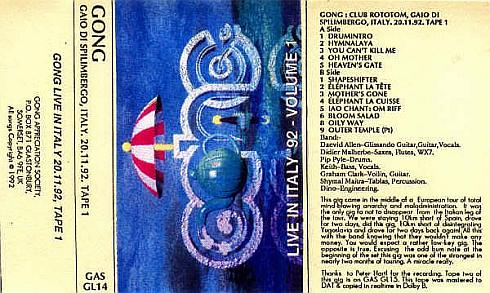 This gig came in the middle of a Eropean tour of total mind-blowing anarchy and maladministration. It was the only gig to not to disappear from the italian leg of the tour. We were staying 10km short of Spain, drove for two days, did this gig 10km short of disintegrating Yugoslavia and drove for two days back again. All this whith the band knowing that they wouldn't make any money. You would expect a rather low-key gig. The opposite is true. Excusing the odd bum note at the beginning of the set this gig was one of the strangest in nearly two months of touring. A miracle really.

Thanks to Peter Hartl for the recording. Tape two of this gig is on GAS GL 15.
This tape was mastered to DAT & copied in realtime in Dolby B.

The notes from cassette cover (transcript below) state this tape is from the only Italian gig from the tour; either there was also another show in Udine (which is not far from Spilimbergo) or this was really the only italian show and the chronologies list an incorrect entry.

This tape (as its Volume 2 twin cassette) was never released on LP or cd, so it is still an essential addition for completists.