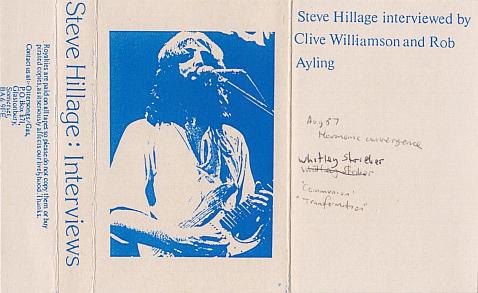 Royalties are paid on all tapes so please do not copy them or buy pirated copies, as it seriously affects our livelyhood.
Thanks.
Contact  us at: - Ottersongs/Gas, P.O. Box 871, Glastonbury, Somerset, BA6 9FE.

Subjects in the interviews:

These interviews are very interesting in-depth views on Steve Hillage's work and are unavailable elsewhere.
No release date and catalogue number on cassette; it appeared for sale on G.A.S. price list 1990.

Thanks to Frank Spears for donating his original cassette.