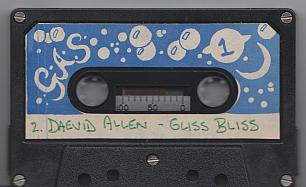 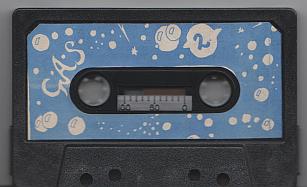 Gliss Bliss was originally released by GAS in 1979 appearing for sale on Essential Gas 1979 list.
This first issue - as other early GAS tapes - had no inlay cover, the cassette was housed in a plastic box which carried a handwritten sticker on the spine reading "D. Allen Glissando Works".
Early GAS cassettes had blue or purple labels with bubbles, moon and planets, handwritten titles and catalogue #.
Above is a picture of my copy.

Gliss Bliss was reissued in 1992 with slightly different content.
"Gliss Pt 3" is a unique piece only available here; although listed on cover, it's NOT present on the 1992 reissue.
The reissue added "Interview With Clive Williamson" and "Crocodile Nonsense Poem" which are NOT on this first version.

Studio gliss tracks on side 1 and Euterpe live section on side 2 are not available on any other official release.