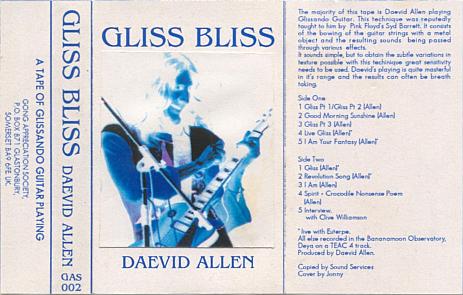 A TAPE OF GLISSANDO GUITAR PLAYING

The majority of this tape is Daevid Allen playing Glissando Guitar. This technique was reputedly taught to him by Pink Floyd's Syd Barrett. It consists of the bowing of the guitar strings with a metal object and the resulting sounds being passed through various effects.
It sounds simple, but to obtain the subtle variations in texture possible with this technique great sensitivity needs to be used. Daevid's playing is quite masterful in it's range and the results can often be breath taking.

* live with Euterpe.
All else recorded in the Bananamoon Observatory, Deya on a TEAC 4 track.
Produced by Daevid Allen.

- Good Morning Sunshine: "Death of Rock" poem intro + "Theme From Hashish To Ashes" (not N'Exist Pas).
- Gliss Pt 3: listed but absent on this reissue (only on 1979 release).
- Live Gliss: "Wise Man In Your Heart"'s ending gliss.
- Revolution Song: aka "Rational Anthem"/"Change The World", mistitled on Magick Brother (Charly).
- I Am: Deya-Spring '77 with Marianne Oberascher and Gilli. Apparently same as on Happiest Time Of Your Life.
- Spirit: Deya - 1975-1976 with Euterpe, from Good Morning. "Love Is How Y Make It" (Angels Egg) drum loop.
- Interview: after 77-09-04 as Daevid refers to Sep. lecture. Bits from R.G. Prediction, PHP's, Good Morning.
- Crocodile Nonsense Poem: Deya '77-08-02 (at Graves Amphitheatre), on Happiest Time. Radio circa Sep 77.

Gliss Bliss was originally released by GAS in 1979 with slightly different content. This 1992 reissue has incorrect tracklist.
"Gliss Pt 3" listed on cover (present on the original 1979 release) is NOT present here.
"Interview With  Clive Williamson" and "Crocodile Nonsense Poem", included here, are NOT on the first release.
"Crocodile Nonsense Poem", unlike stated on cover, follows the interview.

1992 issue has white inlay card, blue lettering and a rectangle stuck on front with negative of Daevid glissing in Hyde Park '74.
See picture above (a scan of my copy).

The studio gliss tracks, the Euterpe live section and the interview are not available on any other official release.