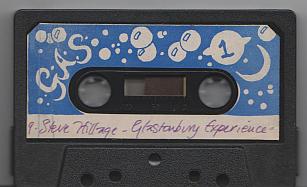 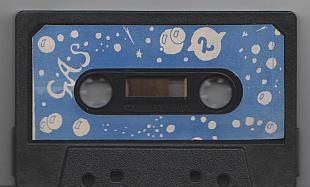 - Intro: starts fading in.
- Electrick Gypsies: ends with "The Salmon Song" intro.
- Hurdy Gurdy Man: halfway through the song the band messed up a bit.
- Light In The Sky: intro riff, unlike on "Motivation Radio", played twice. "Encounters of the 3rd Kind" quote.
- Unidentified: starts fading in, missing the intro.
- The Glorious Om Riff: due to requests for music to stop at midnight the band had to cut the set short.

Glastonbury Experience was released by GAS in 1979 appearing for sale on Essential Gas 1979 list.
This cassette release had no inlay cover, the cassette was housed in a plastic box which carried a handwritten sticker on the spine reading "9. Glass".
Early GAS cassettes had blue or purple labels with bubbles, moon and planets, handwritten titles and catalogue #.
Both blue and purple labels versions of this tape with different handwritten text exist.
Blue label: "9. Steve Hillage - Glastonbury Experience".
Purple version: "Steve Hillage '79 - Glastonbury Xperience".
Scans on this page from my copies.

Glastonbury Experience was never reissued; the material on this tape is not available on any other official release.