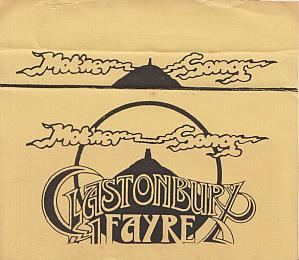 Side 1 (except The Sea) and side 2 tracks 1 & 2 (Military Procession and Customs Man but not Rapist) were recently released as part of Glastonbury Festival 1979-81 cd on Voiceprint label. The rest of side 2 is still unavailable on cd.

Recorded June 21st 1981 live at Glastonbury CND Festival (June 19-21).
Mother Mong played on Sunday June 21st 1981, last day of the festival.
Sounboard recording, a few parts from this tape were used for "Robot Woman" LP.
Lineup is announced at the end (not appearing on cover).

Some pictures of Mother Gong from this gig and more on Glastonbury1981 can be found on the UK Festivals website.

This release appeared for sale from Otter Songs on Whats Going On Gas 82 magazine.
My copy has yellow paper inlay, white Ottersongs labels (scans of my copy), no release date and no song titles.