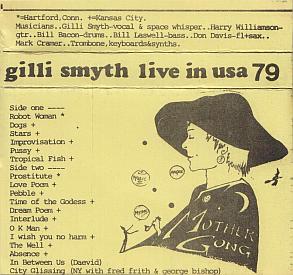 [NOTE: my copy of this tape, instead of the usual Ottersongs labels, has technical data from the company who mastered the cassettes (data in blue added by hand). The title is handwritten in blue felt-pen by Gilli Smyth (scan from my copy below)]:

All rights of the recording company and of the owner of the recorded work reserved.
Unauthorised public performance, broadcasting and copying of this tape record prohibited.

- Robot Woman: early version; quite different from later Robot Woman album version.
- Dogs: one of the "The Three Tongues" chapters (Fairy Tales). Instrumental-only theme (no usual band intro).
- Stars: aka "Brothasister Invocation", a poem on Live Floating Anarchy, not Robot Woman's omonimous track.
- Improvisation: an instrumental version of "Dreaming It" (aka as "Ok Man This Is Your World" on Gilli's Mother).
- Pussy: "Witch's Song - I Am Your Pussy" ("Thank you Kansas...").
- Tropical Fish: NYGong. Also on Daevid Allen Live In USA 79 GAS tape. Impro middle part & coda, no "Selene".
- Prostitute: "Prostitute Poem" (Street Version).
- Love Poem: published on "The Nitrogen Dreams Of A Wide Girl", Gilli's first book.
- Pebble: "What a surprise" verse is also on "Perfect Mystery" (You) and "Princess Dreaming" (Magick Brother).
- Time Of The Goddess: "Brothasister Invocation" (same poem as "Stars"), not the omonimous track on Mother.
- Dream Poem: "I Am Your Fantasy". Includes another unlisted poem ("...Between the thinking...").
- O K Man: Gilli Smyth's version of "Dreaming It" (see "Improvisation" above).
- The Well: aka "The Other Side Of The Tower" on "The Nitrogen Dreams", verses became part of "Tried So Hard".
- Absence: published as "The Gone World" on "The Nitrogen Dreams Of A Wide Girl".
- In Between Us: Daevid's poem. Also on Daevid Allen Live In USA 79, where it includes "Jealousy" (unlisted).
- City Glissing: announcement and heavy breathing from "Rapist" then cuts to "Brothasista Invocation" poem.
A different edit is on Daevid's Alien Going Over The Top (1979 version only) and N.Y. Ding Dong GAS tapes.

This cassette appeared for sale from Ottersongs - GAS on Gong Moving On 1981 magazine.
My copy has yellow inlay card, white Triple 'M' Recordings labels and shows no release date or catalogue number.

It was reissued on cassette (G.A.S. GL7) but never released on LP or CD.

Here's what Brian Abbott (who ran GAS after Harry Williamson & Gilli Smyth left) wrote about this edition in a recent e-mail:

"This must have been original stock that I inherited from Gilli and Harry. These were the first run as far as I can tell. Triple M were the company that did the reproductions. We then later released a whole new batch of new titles and with them came the 'ottersongs' label. So that version of live in the usa is a first edition".