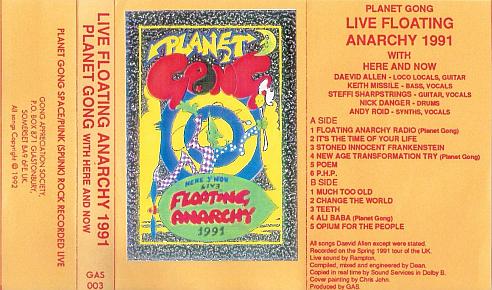 All songs Daevid Allen except where stated.
Recorded on the Spring 1991 tour of the UK.
Live sound by Rampton.
Compiled, mixed and engineered by Dean.
Copied in real time by Sound Services in Dolby B.
Cover painting by Chris John.
Produced by GAS.

- Floating Anarchy Radio: with a swingy middle section ("You better believe it baby"), not on the 70's version.
- New Age Transformation Try: with "No More Sages". "Om Mani Padme Hum" end. No "Brothasister Invocation".
- Poem: "Poet For Sale".
- P.H.P.: "The Pot Head Pixies". Cover incorrectly lists it on side one where it fades out as soon as it stars.
- Change The World: aka "Rational Anthemn" and "Revolution Song".
- Ali Baba: aka "Allez Ali Baba Blacksheep Have You Any Bullshit And / Or (Then) Mama Maya Mantram".
- Opium For The People: unlisted "Where The Little Mushrooms Grow" before a funny spoken intro to "Opium".

Cover incorrectly states this was recorded on UK Spring 1991 tour. There was a Fall tour instead
(Oct-Nov + one Dec gig).

was first released by GAS in 1991 (no cat. #), same content and art but slightly different inlay.

This 1992 reissue has yellow inlay card, red lettering and a color rectangle stuck on front with art by Chris John
(scan of my copy above).