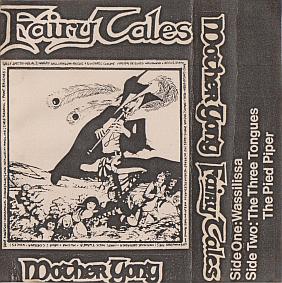 1) The Three Tongues
2) The Pied Piper

All rights of the manufacturer and of the owner of the recorded work reserved.
Unauthorised public performance broadcasting and copying of this tape prohibited. © 1982

This cassette is simply a tape recording of "Fairy Tales" on vinyl. It was done in the same fashion of "Obsolete" in order to make available an album which had been deleted by that time. In 1982 there were no CDs, no internet, no Ebay so finding out of print records was harder than nowadays.

This cassette release appeared for sale from Otter Songs (GAS) on Whats Going On Gas 82 magazine.
My copy has ivory inlay paper (scan of my copy above), white Ottersongs labels.

"Fairy Tales" was reissued on CD by Spalax and later on vinyl by Charly, therefore this is for completists only.