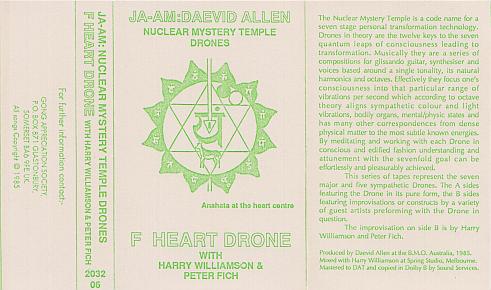 Anahata at the heart centre

The Nuclear Mystery Temple is a code name for a seven stage personal transformation technology.
Drones in theory are the twelve keys to the seven quantum leaps off consciousness leading to transformation. Musically they are a series of compositions for glissando guitar, synthesiser and voices based around a single tonality, its natural harmonics and octaves.
Effectively they focus one's consciousness into that particular range of vibrations per second which according to octave theory aligns sympathetic colour and light vibrations, bodily organs, mental/psychic states and has many other correspondences from dense physical matter to the most subtle known energies.
By meditationg and working with each Drone in conscious and edified fashion understanding and attunement with the sevenfold goal can be effortlessly and pleasurably achieved.
This series of tapes represent the seven major and five sympathetic Drones. The A sides featuring the Drone in its pure form, the B sides featuring improvisations or constructs by a variety of guest artists performing with the Drone in question.
The improvisation on side B is by Harry Williamson and Peter Fich.

Produced by Daevid Allen at the B.M.O. Australia, 1985.
Mixed with Harry Williamson at Spring Studio, Melbourne.
Mastered to DAT & copied in Dolby B by Sound Services.

- F Heart Drone: The Seven Drones has a short and different version. "Hello Me" is yet another version.
- F Heart Drone with H. Williamson: an improvisation on the Drone, as usual with B sides of the Drones tapes.

An earlier version of this cassette was released as OT27 appearing for sale on G.A.S. Merchandise Catalogue.
No exact reissue date on cassette (inlay and labels style reveal these 2032 Drones tapes are early 90's reissues).