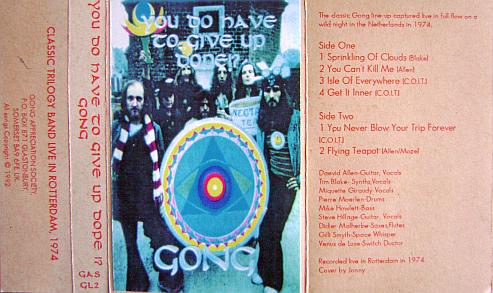 The classic Gong line-up captured live in full flow on a wild night in the Netherlands in 1974.

Note: line-up on cover is INCORRECT

Recorded live in Rotterdam in 1974
Cover by Jonny

- You Can't Kill Me: ends with the usual "Camembert Electrique" coda.
- Isle Of Everywhere: Daevid sings on the intro (Oh Shiva, Shiva...).
- Get It Inner: this version differs from usual as it is played in 13/8 time rather than 12/8.
- You Never Blow Your Trip Forever: at the end there is a long audience call for an encore (almost 7 min.)
- Didier: "I mean, we are a bit tired (...) we are doing gigs all the time (...) tomorrow we play at the Melkweg".
- Flying Teapot: Steve asks: "Why don't you keep clapping?", later used by Daevid on "O Man" (N'Existe Pas).

Note: This is from the December 7th gig, with Bill Bruford on drums filling in for Laurie Allan, not Pierre Moerlen.
Gilli Smyth is absent, Miquette Giraudy taking up her parts (You Can't Kill Me).
Didier says "Tomorrow we play at the Melkweg" (Amsterdam), which they did on Dec. 8th.

This cassette was first issued by GAS in 1979 appearing for sale on Essential Gas 1979 list.
Great performance and a good stereo recording.
An essential addition for completists and classic Gong afecionados as it remains unreleased on other formats to this day and it's a rare chance to hear Bill Bruford performing with Gong.

1992 issue has a light brown inlay card with red lettering and a color rectangle stuck on front cover with a Gong group photo. See picture above (scan of my copy). The cassette has the standard '90s G.A.S. label.

Side 2 of the 1992 reissue starts with wobbly tape source. At 2:05 there is a cut and the problem is solved.
The fault lies in the tape used for duplication. 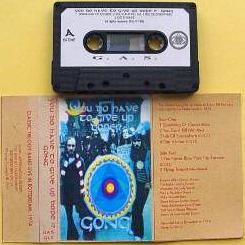