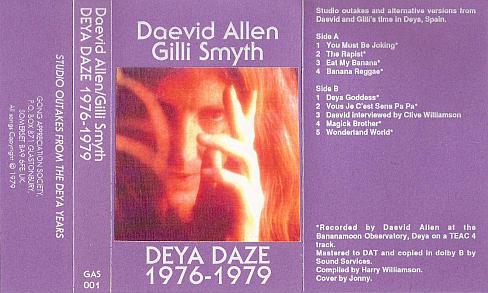 STUDIO OUTAKES FROM THE DEYA YEARS

Studio outakes and alternative versions from Daevid and Gilli's time in Deya, Spain.

* Recorded by Daevid Allen at the Bananamoon Observatory, Deya on a TEAC 4 track.

Mastered to DAT and copied in dolby B by  Sound Services.
Compiled by Harry Williamson.
Cover by Jonny.

These rehearsal tapes were released in 2004 as Daevid Allen & Euterpe
Obscura No. 1: Studio Rehearsal Tapes 1977.

Who plays drums on "The Rapist" and percussion on other tracks? This is a "perfect mystery".

With the release of Obscura No. 1: Studio Rehearsal Tapes 1977 in the Bananamoon Obscura series, most of this material is now available on cd but the unreleased and unedited tracks (including the interview) make this tape an essential collection for Gong completists.

The cover has lavender inlay card, white lettering and a color rectangle stuck on front with a picture of Daevid from the same photo session as Now Is The Happiest Time Of Your Life. See picture above (a scan of my copy).

It has 1979 and 1980 dates for copyright and publishing but I couldn't find any mention of this cassette on any GAS publication or catalogue before 1990.