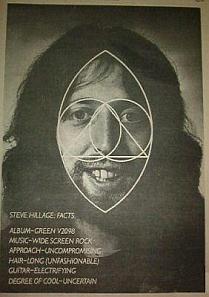 - Intro: unknown music (on Battiato's Mademoiselle Le Gladiator '75) + Aftaglid & Saucer Surfing bits on PA.
- Searching For The Spark: starts as music on P.A. is still playing. "Master Builder" om riff quoted.
- Getting Better: "We'd like to do a very little - happy little song for all the people who enjoy the springtime".
- Palm Trees: cut abruptly with end of side 1.
- Light in The Sky: starts missing the first seconds. Ends quoting "Close Encounters of the Third Kind" theme.
- Hurdy Gurdy Man: ending guitar solo played over chords later to become backing of "Getting In Tune"'s chorus.
- Lunar Musick Suite: the intro theme is not played here.
- Solar Musick Suite: only the final verse ("SunSong" Reprise) with closing solo played on the opening riff.
- The Glorious Om Riff: Steve Hillage's own instrumental rendition of "Master Builder".

This cassette was released by GAS in 1979 as part of the first batch of tapes and appeared for sale on
Essential Gas 1979.
Image above is not the tape cover but a music paper ad for "Green".
The early GAS tapes had no covers and were housed in a plastic box with handwritten sticker with title on the spine.
Unlike many other Gas tapes, this was not reissued in later years and it remains unreleased on other formats to this day.

A good stereo recording of a "Green" era show with the new band playing songs from all the LPs Steve had released until then.

Note: The Motivation Radio/Green demos circulating among collectors on CDr copies of this title ARE NOT on this tape.