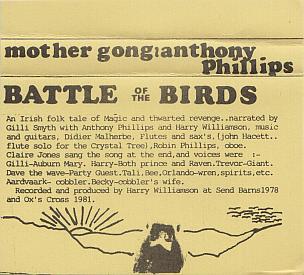 "Battle Of The Birds"

An Irish folk tale of Magic and thwarted revenge..

Recorded and produced by Harry Williamson at Send Barns 1978 and Ox's Cross 1981.

Otter Songs
All rights of the manufacturer and of the owner of the recorded work reserved.
Unauthorised public performance, broadcasting and copying of this tape prohibited.
© OTTERSONGS

Mother Gong is the most authentic modern version of the popular underground group Gong. It includes two members of the original group, Gilli Smyth and Didier Malherbe (Bloom). Plus Guy Evans (ex-Van der  Graf Generator), Harry Williamson, who worked with Antony Phillips on this and other albums, (Nick Turner's "Sphinx" etc).
Mother Gong records include "Mother" 1978, "Fairy Tales" 1979, though all the members have produced several albums, gilli for example wrote the popular "Magic Brother" and "Continental Circus" albums, plus parts of other Gong albums. The basic music tracks for "The Battle of the Birds" were recorded a few years ago by Harry Williamson and Antony Phillips, with the other musicians, and completed in July 1981 by the addition of Didier Malherbe's sax and flute, Yan Emeric's solo guitar, and Hugh Hopper's bass. The story is a traditional Celtic tale, narrated by Gilli Smyth, with different artists playing the various characters. The 1979 "Fairy Tale" album included three stories, Wassilissa, The Three Tongues, and  the Pied Piper, and Panguin Books are interested in this for the children's market when there is a series. It would be brought out as a package, with playroom posters, cassettes, and an illustrated book of the words. "Battle Of The Birds" is the second album of the series, and is now available for release.

Some backing tracks used for this album (no instrumental or vocal overdubs) can be found on Gypsy Suite (Blueprint 1995).

This cassette appeared for sale from Ottersongs - GAS on Gong Moving On 1981 magazine.
My copy has yellow inlay card, white Ottersongs labels (my scans) and no release date or catalogue number.

Harry Williamson re-edited and remixed this album; in 2003 Blueprint released it on cd with bonus material.
You can buy Battle Of The Birds on line from Planet Gong official website and support the artists.

The cassette and cd editions show several differences: the cd issue has some sound effects not appearing on cassette, the narration occurs over different musical parts and some of the voices are different (for instance the farmer's voice at the start).
Recording dates and credits for the musicians on the two releases differ as well;
The chapters are also titled differently (titles for the tape version appear on release sheet but not on cassette);
below is how they appear on both editions: 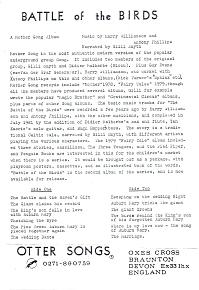