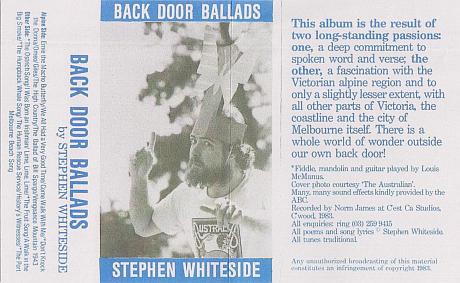 This album is the result of two long-standing passions: one, a deep commitment to spoken word and verse; the other, a fascination with the Victorian alpine region and to only a slightly lesser extent, with all other parts of Victoria, the coastline and the city of Melbourne itself. There is a whole world of wonder outside our own back door!

Any unauthorized broadcasting of this material constitues an infringement of copyright 1983.

This was a self produced tape sold in GAS Merchandise Catalogue 1988.
No GAS or Ottersongs logo appearing on cover.
I got my copy on cd from Stephen Whiteside.

Here are some words from Stephen about this cassette (personal email 2008):
"Back Door Ballads", was never a part of Ottersongs. In fact, I had never heard the phrase until you used it today. It was an independent release. I do have very fond memories of Harry and Daevid, though...
I'm thinking that now, 25 years after its original release, might be a good time to re-release it on CD. 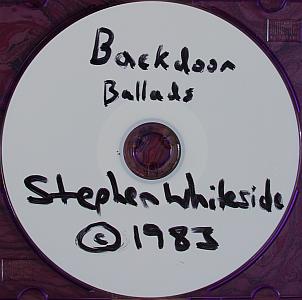