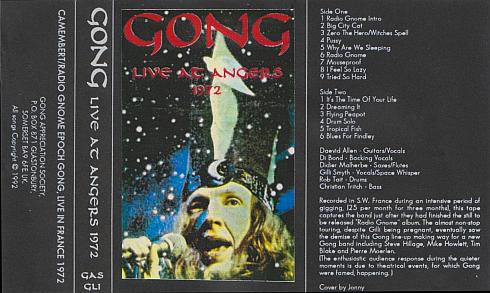 Recorded in S.W. France during an intensive period of gigging (25 per month for three months), this tape captures the band just after they had finished the yet to be released 'Radio Gnome' album. The almost non-stop touring, despite Gilli being pregnant, eventually saw the demise of this gong line-up making way for a new Gong band including Steve Hillage, Mike Howlett, Tim Blake and Pierre Moerlen.
(The enthusiastic audience responde during the quieter moments is due to theatrical events, for which Gong were famed, happening).

- Radio Gnome Intro: band intro over Sly Stone "Somebody's Watching You" on PA followed by collage intro.
- Big City Cat: early version of "The Pot Heat Pixies" with slightly different lyrics.
- Zero The Hero / Witches Spell: Gilli's section has spacewhisper, not "Taliesin" part.
- Pussy: "Witch's Song / I Am Your Pussy".
- Why Are We Sleeping?: includes part of "Fohat Digs Holes In Space".
- Radio Gnome: early version of "Radio Gnome Invisible". Parts of the verses are played at double tempo.
- Mouseproof: aka "Maybe You Believe it"; from same era as on Live At Lyon tape. Includes "I Got A Donkey".
- I Feel So Lazy: same version as on The Mystery & The History Of Planet G**G (Demi-Monde only).
- Tried So Hard: split between two sides; uncut on Mystery & The History Of Planet G**G (Demi-Monde only).
- It's The Time Of Your Life: it can be heard fading as it's starting on Mystery & The History Of Planet G**G.
- Dreaming It: starting from this track, the rest has better sound and wider image than the previous tracks.
- Flying Peapot: sic! ("Flying Teapot"). It features a coda which is pretty different from later versions.
- Drum Solo: Rob Tait's drum solo.
- Tropical Fish: no "Selene" coda.
- Blues For Finley: Ends with "Ya Sonne" Camembert Electrique coda.

Recorded in Angers, France - November 8th 1972.
No exact date on cover. (Tape starts with band intro, missing Diane Bond's name but the same recording on Haunted Chateau has the complete intro with her name).

This material with the exception of two tracks ("I Feel So Lazy" and "Tried So Hard") remains unreleased on CD.
Haunted Chateau GAS cassette features the first three tracks of this tape (but "Zero The Hero" is cut early).
The odd thing about the show is people in the audience screaming like beatlemaniacs. Most songs were unreleased at the time.

1992 issue has black inlay card, white lettering and a rectangle stuck on front with a picture of Daevid at the Paris '77 Reunion. (Pictures on this page are scans of my copy).

Thanks to Daz for donating his original cassette.