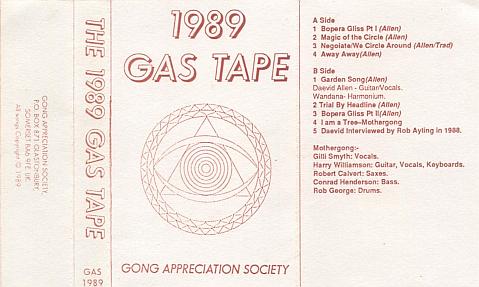 This tape for GAS members was originally released on Ottersongs label (no catalogue number and no tracklist).
This 1993 GAS reissue has identical content and different cover.

Except for two tracks (Mother Gong and the interview) this tape features tracks by Daevid Allen & I.O.C. of Oz.

The sources for the date of these recordings are controversial.
The first release with material from these sessions was this 1989 Gas Tape with "Bopera" (I & II), "Magick In The Circle", "Negotiate", "Garden Song" and "Trial By Headline" with no info on lineup and recording date.

Then came the The Australian Years (Voiceprint 1990) with "Peace Training" (different title for "Negotiate").
The notes state the collection is representative of Allen's Australia 1982-1988 period - "...The last piece being mixed the night before he returned to England" (that is early 1988). Again, no info on the musicians involved.

Next release with songs from the sessions was Daevid Allen (Voiceprint Radio Sessions) (1994 promo cd) with "Magick In The Circle" and "Peace Train".
The notes say "Recorded January 1988 and mixed the night before returning to Europe after an eight year exile."
The lineup is Rob George, Shakti, Ellie, Wandana and Daevid Allen.

The recent Invisible Opera Company Of Oz - Melbourne Studio Tapes BMO10 cd has all the songs (plus four other unrealeased songs) except for "Away Away" which can be found only on 1989 Gas Tape.
The cover says that "In February 1990 Daevid returned to Melbourne from the UK where this spontaneous demo sessions took place at Harry Williamson's studio in St. Kilda".
The lineup adds Harry Williamson and lists Dougie Kerr on bass (is he Shakty?).

I stick to the January 1988 date as this lineup (with help from Harry Williamson) appears to be: