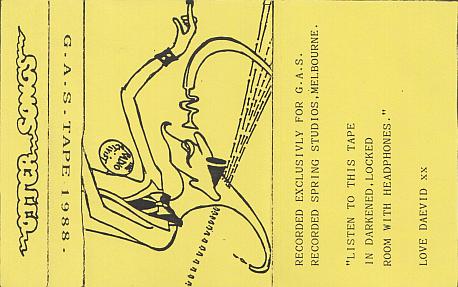 "Listen to this tape in darkened, locked room with headphones."

All rights of the manufacturer and of the owner of the recorded work reserved.
Unauthorised public performance broadcasting and copying of this tape prohibited. C 1982 (*)

(*) Note: The 1982 copyright date is a general Ottersongs reference and is not related to this specific release.

This first Ottersongs issue of the 1988 GAS members tape had no catalogue number and no tracklist.
GAS label later reissued it with identical content and different cover.
Titles appeared on that release (added notes from me):

This tape was conceived as a collage of many diverse Gong Family aspects; no Gong band music here.
My copy has yellow inlay card (scans from my copy on this page), white Ottersongs labels, no release date.

It was reissued in the early 90's on G.A.S. label with same content but different cover.